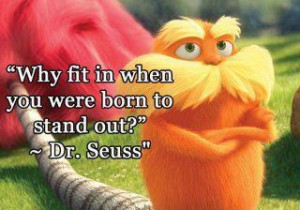 There’s a story I just love, that I heard from the popular TED talk with Sir Ken Robinson. (It’s a very good talk, by the way, if you haven’t seen it; really funny and really moving.)

He’s talking about creative kids and the traditional school system, and he goes into a story about a young girl whose mother was called up by her school, informing her that they thought her daughter had a “learning disability”. She “couldn’t concentrate, was fidgeting” in class (maybe this sounds familiar?). So her mother took her to see a “specialist”, and he talked with both of them about all the trouble she was having in school…and at the end of the session, he told the girl that he needed to speak with her mother in private, that they would just step out of the room for a bit. As the specialist led her mother out of the room, he punched on the radio – and the girl started dancing.

If you’ve seen this talk with Sir Ken Robinson, you might remember that this young girl from the story is Gillian Lynne, who grew up to be not just a professional dancer but the choreographer for major Broadway productions such as Cats and Phantom of the Opera.

As Sir Ken Robinson himself points out – back then, ADD and ADHD didn’t exist (among other disorders, including Autism). So I can’t help but wonder, what would happen if Gillian grew up in today’s day and age instead of in the ’30s?

I’ve been thinking a lot lately about creatives and anxiety. I first started noticing in high school, when a good friend of mine would forever be clapping his hands against the desk; he was in Music and Drumline. I made another connection when I once saw my nephew – who also plays the drums – doing the exact same thing. And yet another connection when I more recently observed a friend of mine, who also makes music, fidgeting when he wasn’t even the one playing. (I think it may be more noticeable with musically-inclined creatives, but if you pay attention you’ll see it in other young creatives, too.)

The reason I bring this up is most modern schools of thought would just label this nervous energy. I’m willing to bet that it’s not “nervous energy” at all. It’s creative energy. We’re just bottling it up.

I grew up with a lot of anxiety when I was a kid. I still have some, but I’ve learned how to move through a lot of it in recent years so that now, it’s much, much better than it used to be. I was also very creative as a kid. I was always singing, dancing, acting, writing, drawing, or coloring. I used to think this was just a coincidence. But I’m still hearing about creative kids and teens right now that I know personally – that make music, do photography, write, sing, you name it – who are struggling with their own anxieties, at least on some level.

So what is the link between creativity and anxiety? One thing I’ve learned in my personal life, creative and otherwise, is “anxiety” is really just a fancy word for fear. At the root of anxiety, there is always some kind of fear.

But it’s never as simple as asking yourself, What am I afraid of? because we all subconsciously invent blocks – or as I like to call them, disguises – to mask the fears that are hiding somewhere inside of us. It’s completely normal, it’s our protection. Without these disguises, most of us couldn’t face everyday life.

The world can be a scary place – especially when you’re creative because sometimes it feels like the general public just doesn’t understand you. People say it all the time, that artists are “weird” or “troubled” or “crazy”. The truth is that everyone is creative. But most will deny their creativity so they can fit into society. It’s not really even a conscious thing, fitting in is a basic human need, it’s how we survive and how our species has learned to survive. I believe it’s a huge driving factor in why arts programs and creative kids are suffering in schools.

So what did I learn about my own anxiety? I learned that my own anxieties – my own biggest fears I’ve been hiding for years – were really just my own way of denying my creative power.

If you’re worried that maybe it’s not worth it, just know that you always have a choice. For years I chose to live a life without music, rejecting it every chance I got. I used to think there was something wrong with that, but that was just my way of coping back then. Now I’m choosing to reclaim my creative power, not because other people are asking me to but because I want to.

It’s certainly not easy; I’m not gonna lie, sometimes it downright sucks. But I encourage you, as a young creative, to really think about what your own creativity means to you. It’s important to trust your own process. If you feel you’re ready, explore all creative aspects of yourself. If you’re not ready for that yet, that’s okay too. Just think about it. Practice getting to know your creativity again.

What do you think of nervous energy vs. creative energy, and do you (or did you growing up) ever have any anxiety as a creative?