CBS’ little known TV comedy, Partners just got canceled in its first season, and logically I know I shouldn’t be sad. The show was not great; it was barely good, and to tell the truth, it really, really sucked. With its godawful writing and predictable plots, it was a mediocre show at best. It’s any wonder it survived the world of TV comedy as long as it did. Basically, Partners didn’t stand a chance.

So why am I a little disappointed over a series getting canceled I predicted would get canceled? 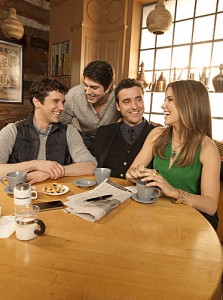 Because I grew to love the characters. I know it may sound silly to the average TV watcher who managed to catch Partners on-air (and I’m sure if you did, you would have shut it off in about ten seconds) because the characters were very stereotyped. Obnoxious gay guy with a too-good for him boyfriend. His straight best friend who just got engaged to his beautiful fiancee. See what I mean? Stereotype city, right. Some gays were even offended by it.

To be honest, my whole reason for watching Partners was just to watch Brandon Routh kill it in his performance as Wyatt every single episode (and, you know, because he makes great eye candy).

But after a while I got attached to the rest of the cast too, and even though Michael Urie’s character on Partners was stereotyped to an unnecessary extreme, I will actually miss him. Why? Heck, I’m not even sure I know the answer to that question. That’s why characters continue to fascinate me.

What characters have impacted you in a way you’ll never forget?